Many people dream of living on some far away deserted island. The idea in itself is so appealing, however the reality of it may not be. Hot humid sunny windless days followed buy hot sticky humid nights. This monotony only broken by down pours of rain. Not as great as we first thought hey?  Well not for me anyway.

As humans I feel we resist change, one moment we are complaining its to hot and the next its to cold. Well for us down at the very tip of Africa we have no choice. We have had a great hot summer but as each day rolls by it is clear that it is changing. Winter is coming. Most people recoil at the thought. I choose to believe its all about perspective.

I look forward to less tourists clogging the roads as well as ample parking. No more South East wind.( This can blow for two weeks solid). No more crammed beaches filled with peoples litter. I look forward to the chill in the air. The dramatic red sunsets and beautiful still days. Winter swell that is great for surfing. Cold water upwelling’s that bring a burst of life into our bay. 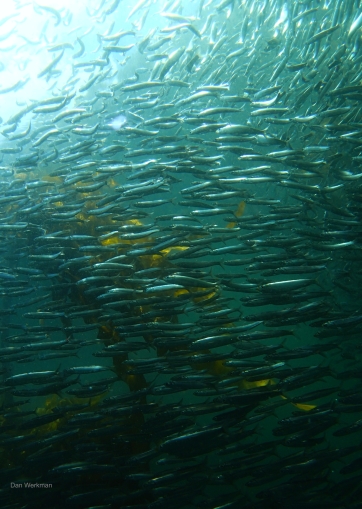 Most of all I look forward to the clear blue water. I always joke that it looks so clear and blue becouse its act a block of ice.

Lets face it the water temp drops from a balmy 22 deg in the hight of summer down to a refreshing 12 deg which can even drop to 10 in places. Fiona and I don’t wear wet suits as we think it isolates you to much from the environment. I do wear a hoody and ear plugs to stop the bones in my ears growing closed.(Its the side effect of swimming in cold water to much). The rash vest is to stop jelly stings and some irritating rash I tend to get on a type of fire coral. Wet suits are such a faff anyway, so why bother. The freedom to swim like a fish and feel the thermoclines, touch the kelp and be as close to immersed in this world as possible. That’s the key.

The accepted theory is that our Great White shark population moves a little offshore to a place in the middle of the bay called Seal Island, feeding on the new seal pups. This leaves us in relative safety to venture into deeper waters. We now have more time to get to know some of the locals!

So its on. Now we can find parking, go exploring new places in the rain, drag my kayak down to the beach and get some great surf. So never mind the cold and rain its all part of this change. The best part for me is defiantly the swimming. We can now swim in cold clear relatively safe water. Fiona and I both really look forward to this time of year. Finally  we can dare ourselves to swim out into deep water caves and start exploring again.

Dont get me wrong Summer is great but Winter  is when you know you are Alive.

6 thoughts on “Winter is coming”